Skip to content
WHY IS TRANSPORT A TRANSITION ISSUE? 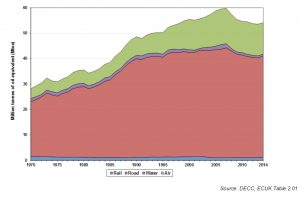 When we think about energy we tend to think of heating, lighting, cooking, possibly industrial use. Actually, transport in the UK uses the equivalent of around 54 million tonnes of oil (Mtoe) in a year. That’s nearly 40% of our total energy consumption. Worse than that, while other uses, particularly industrial use, have dropped, the amount of energy we use for transport is actually increasing.

The biggest use by a long way is road transport – 40 Mtoe in 2014. Some of that of course is moving goods around, but over half of it comes from cars.

All of which means that if we’re serious about reducing energy consuption and our carbon footprint we can’t ignore the energy we use for transport.

Plus, while there are more electric vehicles around, and even buses that run on gas produced from sewage, the vast majority of vehicles still run on petrol or diesel, and so are vulnerable to external factors beyond our control.

WHAT CAN WE DO ABOUT IT?
As individuals, we can do a lot. We can choose to cycle or walk, with the added advantage that it keeps you fit. Most of us can also make much better use of public transport; buses and trains use a lot less fuel per passenger mile than private cars, and what’s more they’re safer and you can make use of the time to read or work while you travel. We can definitely avoid short haul flights – greenhouse gases emited at high altitude have a much bigger impact on the climate than those emitted at ground level.
Transport energy is another very good reason to think very carefully about where what we buy has come from and buy locally produced goods when we can.
As Transition we’ve always promoted public transport. For instance:

More recently, alongside other organisations in the town, we have held discussions with Nestle and their agents about the future of the Station Road site; one of our key objectives is to ensure that whatever development takes place there does not jeopardise the re-opening of the rail link.

We’ve also encouraged cycling by for instance holding bike maintenance workshops, and we’ve been gathering ideas about possible cycle routes within the town.
We know there’s a lot more we can do. If this is an area you’re interested in please get in touch.

Tim Lang, the UK’s leading expert on food policy, says we already faced a challenge unmatched since the war. And things just got worse… tinyurl.com/t84hkqm

Will this turbulence catalyse a much-needed reboot of our global financial systems? Can our experiences through COVID-19 strengthen our resilience and leave us better able to cope with uncertainty? forumforthefuture.or…

The coronavirus has highlighted the importance of community. In a new survey a huge 83% of people agree that having a strong community around you is important.

RT @_wearepossible A ray of hope for your Tuesday - a new paper suggests the government might be taking the need to decarbonise our transport system seriously, although more action will still be needed to cut dependence on flying. 🚲🚃 bbc.co.uk/news/scien…