WHAT YOU NEED TO KNOW ABOUT OIL

We rely on Oil for Everything!

All the key elements of industrial societies, for example:

are reliant on cheap and plentiful oil and/or gas, which is why we use so much of the black stuff. (about 80 million barrels per day at present).

Great! But there are some snags.

Snag 2. Obviously, oil companies started extracting the most accessible oil. This was relatively easy and cheap. But the World’s population increased and anyway we all wanted (not least Chinese and Indians) to increase our standard of living. Even when people have enough for a reasonably comfortable life the advertising industry and built-in obsolescence make sure that they keep working more to buy more. The worst nightmare of politicians and economists is that GDP might stop growing. So the world needed, and if nothing changes will continue to need, more and more oil.

Snag 3. Two things have happened: (a) some oil-rich nations (OPEC plus sometimes others) worked together in various ways to limit production; (b) (more significantly in the long run) production from the world’s major oil fields started to peak and then to fall as the oil was extracted. These caused the price to rise, which made it economically attractive for oil companies to seek out oil in difficult and dangerous places – tar sands and shale gas (what’s referred to as ‘unconventional oil’) on the one hand, and extreme areas like the Arctic on the other. These new oil sources not only cause more environmental damage, they also take more energy to extract and turn into useable fuel.

Prices fluctuate wildly however, partly due to conflicting efforts to limit or increase supply and partly due to the ups and downs of the global economy. At the moment prices are low, but this is unlikely to last, and in the long term prices are likely to be unstable. The only way to guard against higher prices is to reduce our demand.

Reducing oil dependency represents a real challenge in Buxton, a town which relies on transport for tourism, food, manufacturing output to name a few; many of us have to travel outside of Buxton for work. But there are ways to achieve it. 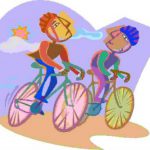 One objective for a Transition Town is to make it easy for people to work together. For example, to share lifts to work,

to develop cycle ways, to reuse and recycle or to grow a variety of their own food using organic methods. We can also look to reduce our own personal energy demand and develop community energy generation schemes.

By making it easier for people to meet and share ideas we can start to build a resilient and sustainable community.

After the financial crisis, green investment paid dividends. Coronavirus presents an even greater opportunity to green our economy tinyurl.com/yamt4yge

Where do we go from here? tinyurl.com/y822nkds

It would be tragic to go back to yesterday’s “business-as-usual”; moments of radical disruption like this provide unprecedented opportunities to reinvent the future. Business, govts, civil society & communities need to seize this moment. tinyurl.com/ycynucyh